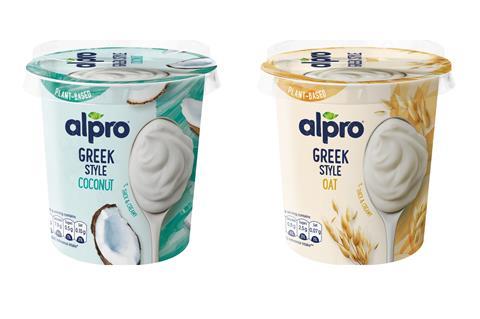 Launched last week in oat and coconut-based variants, the dairy alternatives boast a thick and creamy texture while also promising to deliver on health. Alpro said the NPD was low in sugar and contained no added sugar as well as live cultures.

The oat variant also offered calcium and vitamins D and B12, was low in saturated fat and a source of fibre, the brand added. Both products have gone on sale in Tesco stores nationwide (rsp: £2/350g).

Alpro said the NPD had been designed to tap the ongoing trend for permissible indulgence seen in the yoghurt category, with data showing Greek Style yoghurts had grown 12% in value year on year [IRI 52 w/e 2 January 2021].

“Taste and health are key factors in driving shoppers into the category and these latest additions to our Greek Style range certainly tick both those boxes,” said marketing director at Alpro UK & Ireland David Jiscoot.

“The mild taste of oat and delicious flavour of coconut coupled with the luxurious experience of Greek Style that consumers know and love is low in sugars thanks to the power of plant-based. Better still, with oat and coconut now the first and second fastest-growing ingredients in the total category respectively, there’s clearly a huge opportunity to mirror this success in the yoghurt aisle, which has, until now, been massively under-represented.”

The NPD is Alpro’s first since it was awarded ‘outstanding’ B Corp status, following its “sustained innovation strategy and ongoing environmental commitments”. In doing so, it became the first UK plant-based brand to achieve the status. 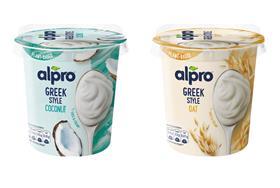