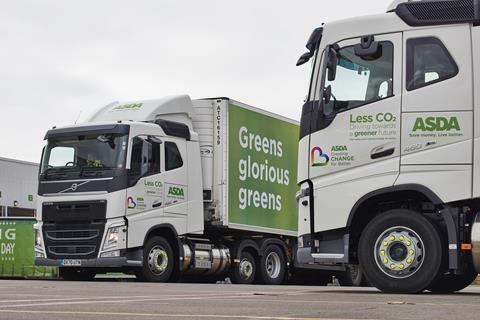 Asda slashed its greenhouse gas (GHG) emissions last year by 16%, according to figures published for the first time by the retailer today.

The figures have been published in Asda Group Limited’s annual report and accounts for the year ending 31 December.

They show Asda generated 555,271 tCO2e (Scope 1 and 2 emissions) during 2020 across its entire UK operations including all its offices, depots, distribution centres and stores – a year-on-year reduction of 109,199 tCO2e.

Asda said it was continuing to invest in low carbon technologies across its stores and depots as part of its long-term strategy to reduce Scope 1 and 2 emissions (relative to a 2015 baseline) by 50% by 2025 and become a net-zero carbon business by 2040.

Plans include moving its HGV delivery fleet from diesel to gas by 2024 after a successful pilot showed vehicles powered by biomethane reduced CO2 emissions by more than 80%. It said it had already rolled out 300 gas-powered trucks and has another 200 on delivery next year.

The supermarket said it was also focusing on reducing refrigerant gases through the introduction of new low-carbon refrigeration technology next year, which will reduce direct emissions by more than 90% when rolled out to all stores.

Meanwhile, Asda has installed LED lighting in all stores and is in the process of rolling this out across its distribution centres.

“We remain focused on halving our direct carbon emissions by 2025 and will continue to embrace new technology and focus on efficiency across our fleet, stores and depots, as well as using renewable sources whenever possible to hit this target,” said Susan Thomas, director of commercial sustainability at Asda.

“In line with the wider commitments we set out in our first ESG report published recently, we will continue to be transparent about our progress against these targets.” 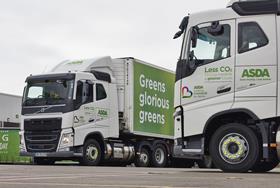