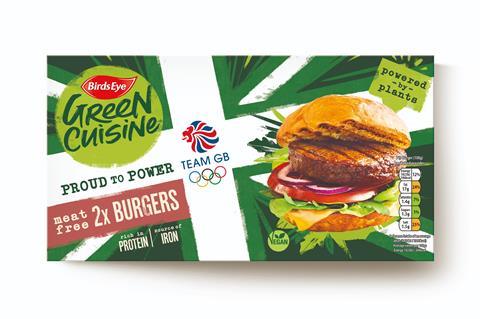 Birds Eye has teamed up with the British Olympic Association ahead of this summer’s delayed Tokyo Olympics.

The frozen giant’s Green Cuisine brand will become the official plant-based supporter of Team GB, in a move that will see packs sport a new union flag look from the start of July ahead of the Games, which begin on 23 July.

Alongside the packaging redesign, the Nomad Foods-owned brand is set to publicise the tie-in with the addition of a tag to the end of TV adverts it is currently running as part of a wider campaign. The partnership will also see it run in-store activations, on-pack promotions and social media activity with Team GB athletes.

Birds Eye said it hoped the move would continue to push meat-free into the mainstream.

“We have a relentless ambition to demonstrate the delicious power of plants, dispelling any lingering misconceptions around the meat-free category,” said Birds Eye UK marketing director Sarah Koppens.

“We conducted a quick-fire Facebook poll with a group of 56 past and present Team GB athletes and over two-thirds said they’ve actively reduced their meat consumption over the past three years. We look forward to bringing some of their stories to life throughout our campaign.”

Birds Eye’s announcement follows that of Yoplait Kids, which last month launched its partnership with Team GB for the next three Olympic Games – Tokyo 2020 as well as the Beijing Winter Games and Paris 2024. McVitie’s and Aldi are also official food sector partners of Team GB. 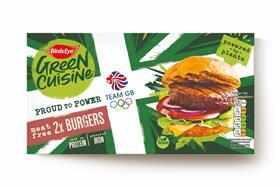