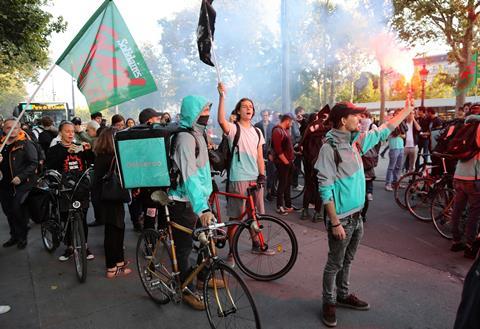 The Independent Workers’ Union of Great Britain has claimed more than 200 Deliveroo riders joined its London protest on Thursday.

Hundreds more joined action in York, Sheffield, Reading and Wolverhampton, the union said, with an unknown number of Deliveroo couriers taking part “merely by not logging on to the app”.

In London, couriers on bicycles and scooters rode from Shoreditch to Finsbury Square, stopping to protest outside Deliveroo HQ in Dowgate Hill, as well as the London Stock Exchange and the offices of Deliveroo investors T Rowe Price. They also protested at the offices of Goldman Sachs, which The Financial Times this week reported bought about £75m in Deliveroo shares to prop up trading following the company’s disastrous IPO.

“Today’s strike was for the bare minimum,” said Alex Marshall, IWGB president. “These guys were looking after shielding people while the country stayed at home. They put their lives and their family’s lives at risk on sub-minimum- wage pay while Deliveroo have been getting richer and richer. If Deliveroo can’t give its riders even that we will continue to strike. We will boycott until pay and conditions are sufficient for riders to live on.”

Some riders not taking part in the strike reported more available work in the areas where action took place. Deliveroo claimed the action resulted in “minimal disruption” to its service.

In rider online forums and WhatsApp groups, couriers appear split over the need for strike action.

“Instead of striking why don’t you lot put your time to better use and look for a new job – self employment isn’t for you. Leave us lot who don’t want an hourly cap on wages, loose [sic] our right to work when we want and reject orders, alone,” one said.

“People standing up for their rights trying to get a fairer share of the wealth they are creating for Deliveroo and you want to stab them in the back,” said another. “Working people fight each other while the rich take everything.”

The Grocer has sighted phone footage from one of the protests in which a rider picking up a take-away order where they would make £4 was offered £5 in cash to turn it down, which they refused. On the day of the strikes, Deliveroo shared the results of its own survey of 8,500 riders conducted on Wednesday, which indicated 89% of riders were satisfied or very satisfied working for the company.

“This small self-appointed union does not represent the vast majority of riders who tell us they value the total flexibility they enjoy while working with Deliveroo alongside the ability to earn over £13 an hour,” a Deliveroo spokeswoman said.

“We are proud that rider satisfaction is at an all-time high and that thousands of people are applying to be Deliveroo riders each and every week.”

Deliveroo debuted on the London Stock Exchange last week. Shares on its first day of trading crashed as much as 30% valuing the food delivery service at £1.2bn lower than hoped. The share price has rebounded slightly since Thursday and was unaffected by the strike. 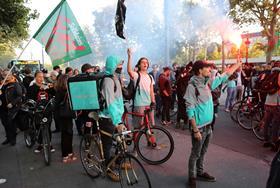