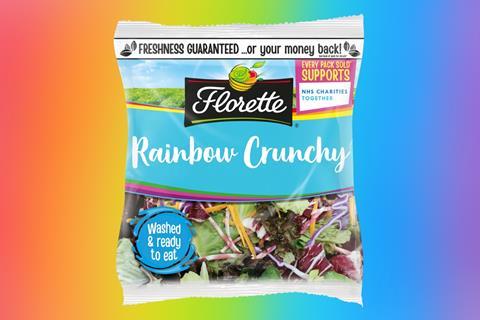 Florette has announced NPD and a major marketing campaign as it seeks to reinvigorate the currently “unexciting” salad category.

Both launching in April ahead of the category’s key summertime sales period, the brand’s new Rainbow Crunchy salad bag and £1m marketing campaign will also aim to tap into the consumer demand for healthy foods in the wake of the Covid-19 pandemic.

Rolling into Sainsbury’s from 12 April, Florette Rainbow Crunchy is set to contain vibrantly coloured vegetables – such as carrot and beetroot – accompanied by mild leaves and comes at what the brand described as an EDLP price point (rsp: £1.10/125g).

“A lot of the time, people are having very boring salads,” said Florette UK head of marketing, Hazel Clark. “They buy a bag of salad, some tomatoes and some cucumber. We just want to make it so that people are wanting to have that salad so it’s not just about being healthy. We really want to create that standout with the colours and the mix.

“We also know people are even more health-conscious than they were this time last year and we know eating a range of different coloured foods is important for making sure you’re getting the vitamins and minerals you need.”

Clark added that the brand would run meal inspiration on back of pack, on its website and as part of its marketing campaign to inspire “everyday recipes”.

The NPD will also launch with an on-pack partnership with NHS Charities Together – with Florette pledging 2p from each pack sold will go to the charity – and will carry Florette’s Freshness Guarantee, a scheme it launched last year whereby consumers can claim a refund should the product not keep fresh until its use-by date.

She said the firm had received “fairly low levels of claims” since the guarantee’s launch.

Taking place alongside the NPD launch, Florette’s marketing push will feature advertising across print, digital and social media channels between 1 April and 12 September.

The campaign is set to include shopper marketing and in-store activations, such as shelf strips in companion categories and vinyl floor stickering. The brand said it was currently in discussions with retailers over their deployment.

The announcements come as Florette has eyed numerous opportunities for the salad category in light of the Covid-19 pandemic.

Not only does it anticipate continued consumer demand for healthy products after lockdown restrictions ease, but it also said it believed it could benefit from government policy, such as the mooted crackdown on sales of HFSS products.

“If the HFSS recommendations do go ahead next year, that potentially allows us some opportunities to have access to more spaces on shelf,” said commercial and marketing director UK & Ireland at Florette’s owner Agrial Fresh, Anthony Greenwood.

“We think the government is likely to do a bit of nudging with health going forward in light of the past 12 months, there could be a part to play in there. There have been no conversations on this front yet.”

Reflecting on Brexit, Greenwood added Florette had avoided any shortages but said the process of importing its fresh produce to the UK had become “more administrative, slower and more expensive”. 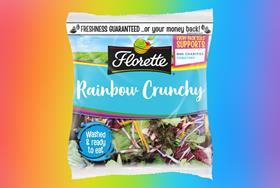