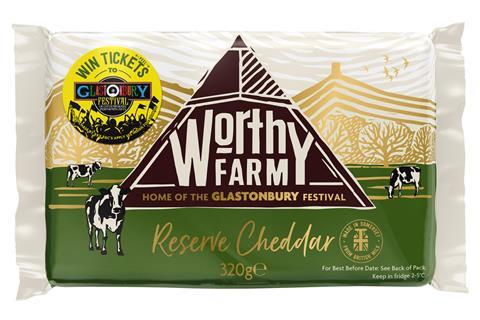 Wyke Farms has teamed up with nearby Worthy Farm – the home of Glastonbury Festival and an award-winning dairy farm in its own right – for the launch of a Glasto-themed reserve cheddar.

The cheese, which is exclusive to the Co-op, will go on sale nationally on 17 February, and has been created using milk from Glastonbury founder Michael Eavis’ award-winning herd, which graze on the festival site all year round.

Worthy Farm Reserve Cheddar carries packaging that pays homage to the iconic Pyramid stage. It is aged under wood for six months, and delivered “a mature rounded, smooth and moreish flavour with a hint of sweetness”, the Co-op said.

“Representing quality and heritage, this cheddar brings together two neighbouring farms, with one producing top quality milk and the other famous for its craftsmanship in the art of sustainable farmhouse cheese making,” it added.

As part of the launch promotion, Co-op members and customers will have an opportunity every month to win tickets to the next Glastonbury Festival. The competition will also be highlighted in store by a special on-pack promotion.

“About 100 years ago, my grandfather decided to make the milk at Worthy Farm into Caerphilly cheese,” Eavis said.

“Now, after 50 years of our recent festival history, our farm milk is being made into cheese once again. We’re thrilled that we can work together as a collective, with Co-op and Wyke Farms, to bring this tasty reserve cheddar to households across the UK.”

The Co-op and the Glastonbury Festival already share a successful partnership, with the supermarket becoming the event’s first retail partner in 2019.

“Co-op is well-known for its support of British farmers and producers,” said Co-op cheese buyer Joanne Wadsworth. “Our ongoing relationship and shared values with the Glastonbury Festival makes our stores the perfect home for Worthy Farm Reserve Cheddar.

It comes as Glastonbury announced last month it had been forced to postpone the festival for a second “enforced fallow year” due to the ongoing impact of the pandemic. It said it was “very confident we can deliver something special for us all in 2022”. 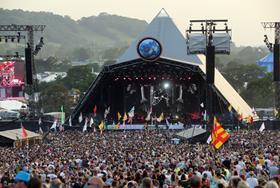