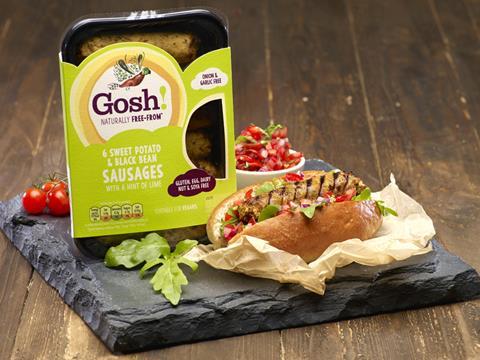 Free-from brand Gosh is close to sealing a £50m deal with a new owner after it revived a three-year long M&A process amid soaring demand for plant-based foods.

The Grocer understands the supplier, which produces a range of vegan falafel bites, burgers & sausages, has received an offer to take over the company, with the potential buyer currently running final due diligence checks.

The buyer is thought to be a trade player as all private equity firms have already passed on the business, according to one dealmaker.

Gosh appointed advisors from investment bank Houlihan Lokey in 2018, but potential interested parties weren’t willing to meet the price expectation of owner Richard Loebenberg, who founded the business in 1998.

Nestlé and meat supplier Cranswick are both understood to have weighed up a deal but were put off by the valuation, a City source said.

Numerous PE houses also looked at Gosh and LDC made an offer of £50m at the tail end of 2019, but the deal fell down at the final hurdle leading Loebenberg, who is also behind kosher frozen ready meal brand Eureka Cove, to pause the process in early 2020.

Gosh has grown rapidly in the past six years on the back of the rise in ‘flexitarianism’ as meat-eaters looked to reduce meat consumption. Revenues have surged from £5m in 2015/16 to more than £20m. Newly filed accounts at Companies House show sales rose 12% to £20.9m in the year ended 31 May 2020.

Operating profits declined from £4.1m to £3.5m as it spent almost £1m on “strategic and financial consultants to assist with the future development and direction of the business”.

Gosh’s foodservice business was hit by lockdown, shrinking sales by more than £1m in the final quarter of the financial year. Strong growth in retail, where the brand is stocked with the likes of Tesco, Sainsbury, Morrisons, Asda, Ocado, Lidl, Costco and Dunnes, helped offset some of the lost business. The business also manufactures private label falafel for the discounters.

“We continued to be profitable and cash generative during the most difficult months, and our current forecasts, which albeit predict slow recovery rates, especially within our foodservice business, show we continue to make positive returns,” CEO Jane Rayner wrote in the accounts.

It added its forecasts gave it the confidence to continue investing in further manufacturing capacity even in these uncertain times.

Even though 2020/21 has been negatively impacted by Covid, Rayner said the directors looked forward to “another successful year”.

Last month, Gosh expanded into the frozen category for the first time, with a trio of allergen-free veggie lines rolling into Lidl.

Gosh expanded its manufacturing space in 2019/20 by purchasing a 17,000 sq ft leasehold site next to its existing 34,000 sq ft factory in Milton Keynes. The business claims its main site is “the only totally free-from factory in the UK”.

During 2019/20, Gosh also ran its first ever above-the-line campaign, featuring outdoor advertising at major transport hubs and selected retailers, video on demand, social and digital media, which resulted in UK household penetration growing year on year by 14.7%, the business added.

Gosh also started exporting to Europe in the year, generating revenues of £380k. 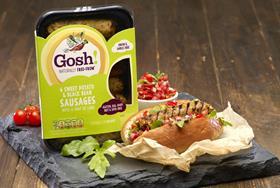