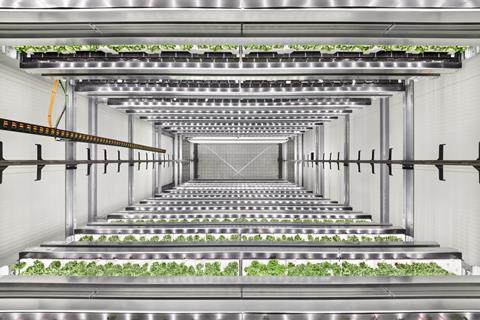 Infarm – which provides retailers with in-aisle vertical farms the size of a chiller cabinet – is moving into larger-scale indoor farming technology.

The Berlin-based firm has launched a line of ‘modular farming units’ it calls Growing Centres, which stand up to 18 metres high and take up 25 square metres of ground space. The first of the new centres will be in London, The Grocer can reveal.

The units are being pitched at “the largest retailers in the world” to operate themselves, and are “specially designed to be intuitive and easy to operate and maintain”.

Infarm is currently known for its remotely controlled, two metre square units which grow a range of herbs in stores for customers to pick themselves. Infarm farmers visit the store after each growth cycle to add new seedlings to the units.

In depth: how vertical farming is taking off

The move changes Infarm’s focus to much larger-scale operations.

“Access to fresh, local and sustainable food is a growing challenge, as people shift towards cities and climate change accelerates,” said Erez Galonska, co-founder and CEO of Infarm.

“Today we’re adding speed to scale with new technology that allows us to deploy a Growing Center to any city in the world in a fraction of the time, space and capital investment of most large-scale farming solutions today,” he added.

The Growing Centres can generate the crop equivalent of up to 10,000 square metres of farmland, and use 95% less water, 90% less transport and zero chemical pesticides compared to soil-based agriculture. They can use up to 40% less energy than existing Infarm units.

By 2025 Infarm plans to establish 100 of the larger units. Some are already planned or under construction in major urban centres, including in London, Paris, Copenhagen, Toronto, Vancouver, Seattle and Tokyo. 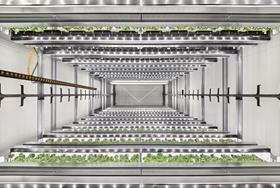