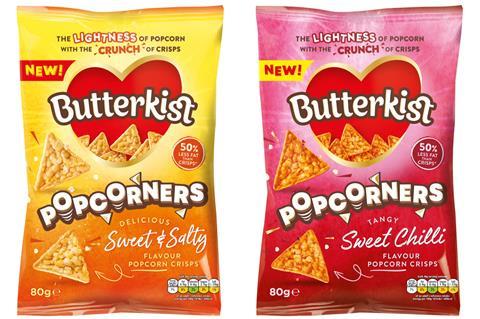 KP Snacks has given its Butterkist brand new look and added a duo of ’popcorn crisps’.

The popcorn brand has been given a makeover and its range extended with the addition of new triangular Popcorners – which it is touting as a ‘crossover’ snack that bridges the gap between popcorn and crisps.

The NPD offered “the lightness of popcorn and the crunch of crisps”, said KP, and is claimed to contain 50% less fat than standard potato crisps.

“With sharing occasions increasing as a result of spending more time home, we have remained focused on improving the in-home experience and in keeping Butterkist top of mind when choosing a snack for those nights in,” said KP Snacks marketing director Kevin McNair.

The new look, meanwhile, will see the tagline ‘Creating Smiles Since 1914’ roll out across the brand’s packs, and solid colour backgrounds replaced with visual patterns and a “more playful” font.

It’s the latest of several new releases from KP. Earlier this month, for instance, it launched a duo of Krunch Mix nut snacks in Sour Cream & Chive and Texas BBQ flavours. 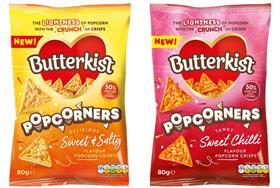