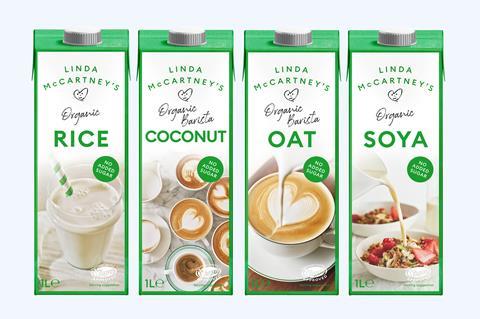 Linda McCartney’s has moved beyond meat-free for the first time, launching a four-strong lineup of milk alternatives.

Made with no added sugar and no more than six ingredients, the organic quartet would deliver on the taste credentials that were “synonymous” with Linda McCartney’s, it said.

The range comprises Barista Style SKUs in oat and coconut variants, as well as Organic Soya and Organic Rice (rsp: £1.99/one litre). It will roll out from 12 May.

Both Barista Style products will appear first in Tesco stores on a three-week run, before returning permanently on 5 July, while four products will head into Sainsbury’s from 28 June.

They come in a carton that would be recyclable at kerbside across 69% of the UK, with 25% of further coverage through bring-back systems, Linda McCartney’s said.

The launch marked the beginning of a “new phase” for the Hain Celestial brand, said its MD Nadine Maggi. “We recognise the need for versatility and variety, and we feel confident that our new range of plant-based drinks offers something for everyone’s usage needs.”

Linda McCartney’s was “particularly looking forward to helping people with choice and we hope to become a household favourite” she added. “With the brand celebrating its 30th anniversary this year, it feels like the perfect moment for such a pioneering innovation.”

How will consumers view JBS’s acquisition of plant-based Vivera?

The brand has also unveiled an initiative to inspire young people to grow their own fruit & veg, which will coincide with this month’s National Vegetarian Week.

‘Grow Your Own With Linda’s’ will seek to tackle the barriers of knowledge and space to get more people into growing food. Linda McCartney’s will fund the creation of a website hosting content from influencers in gardening, mental health and cookery, alongside six community growing gardens across the UK in cities such as Bristol and Glasgow.

The gardens are slated to open from mid-May, with guidance appearing online from next week. 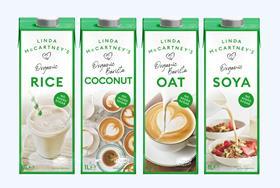