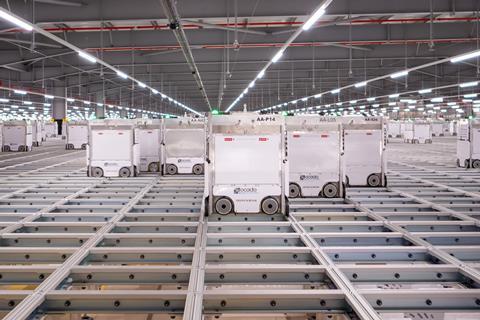 The supermarket giant Ocado has warned customers to expect delays after a fire broke out at its warehouse near the Thames, the second big blaze to have been started by its fleet of robots (The Times £). Ocado’s largest warehouse will be unable to fulfil the UK online supermarket’s orders for several days after a robot malfunction caused a fire. The incident at the site in south-east London is the second major blaze in the past three years at one of Ocado’s vast automated warehouses (The Financial Times £). Ocado has cancelled thousands of orders after a fire at a fulfilment centre in south-east London on Friday (The BBC). Ocado customers face a week of disruption to orders following a fire at the online grocer’s biggest warehouse (The Telegraph).

The supermarket chain Morrisons has opened a shop that has no tills and where customers pick up their groceries and walk straight out (The Times £). Morrisons is testing supermarkets with no checkouts or staff that would let customers simply walk out with their bag of shopping in a move to rival Amazon’s Fresh stores (The Telegraph). Bosses at supermarket Morrisons are close to unveiling an unmanned store that allows customers to put items straight from shelves into their bags, and walk out (The Daily Mail).

The head of Marlboro cigarette-maker Philip Morris International has hit out at critics of a controversial swoop on a healthcare company, claiming that the acquisition will help achieve its target to make the UK smoke-free within a decade (The Times £).

The World Health Organisation has warned that Big Tobacco is seeking to establish partnerships in healthcare to undermine control of its “deadly products”. (The Times £)

Vectura shareholders should stub Philip Morris deal out, writes The Times. “Investors should do Vectura’s staff a favour and reject this offer. By doing so, they’ll show a degree of integrity that’s been so lacking in the boardroom.” (The Times £)

Philip Morris uncovers the two faces of Big Tobacco – Industry giants are trying to diversify into ‘healthier’ products but their efforts have sparked outrage. Anti-smoking campaigners and politicians were horrified by the Vectura acquisition; its inhalers help treat asthma and lung disease — conditions exacerbated by smoking. (The Times £)

Big Tobacco struggles to convince critics it can kick the cigarettes, writes The FT. Many groups are diversifying but the traditional smoking business is still the big money spinner. “When one of the world’s biggest tobacco groups claims it wants to “unsmoke the world” it is bound to meet scepticism, so it was no surprise that Philip Morris International’s £1bn swoop on a British company that makes asthma inhalers caused something of a stir.” (The Financial Times £)

Juul was once the hottest start-up in Silicon Valley. In 2018, the vaping pioneer became the youngest company to achieve a market value of $10bn as its vape pens flew off the shelves. Today, it faces extinction. The US Food and Drug Administration (FDA) is set to decide by September 9 on whether to allow Juul to continue to sell its vapes, or to ban them. (The Times £)

Typhoo Tea is the latest British business to be bought by a private equity firm amid a wave of dealmaking by City buy-out companies. Industry sources said London-based Zetland Capital, led by dealmaker Ahmed Hamdani, has secretly snapped up a majority shareholding in Typhoo Tea. (The Daily Mail)

Supermarkets have warned they will have to cut opening hours or even shut shops if the number of workers forced to self-isolate continues to rise (The BBC). The UK’s top business lobby group and Marks & Spencer have joined a growing chorus urging the government to tackle a nationwide “pingdemic” by immediately amending the self-isolation policy for people notified by the NHS test-and-trace app (The Guardian).

Greene King has been forced to close 33 pubs in the past week due to staff shortages caused by people being forced to self-isolate by the NHS Covid app. (The BBC)

Sainsbury’s director Clodagh Moriarty has said most of its staff and customers want to keep Covid protection measures in place as cases rise and for ‘everyone to wear face masks, if they can’. (The Daily Mail)

Barbecues face potential meat and beer shortages, as a lack of carbon dioxide for processing plants is expected to squeeze supplies. (The Telegraph)

The premium paid by shoppers for gluten-free versions of staple foods could increase in the coming months as the soaring cost of ingredients such as rice flour casts a shadow over the “free from” aisle in supermarkets. (The Guardian)

People are at their most eager to spend for at least 13 years, according to one poll of consumer confidence. (The Times £)

Amazon has cast a long shadow over Britain’s supermarket sector since it began selling groceries online five years ago, but so far it has only tinkered around the edges. However, recent events suggest that we may finally be getting a sense of the true scope of Amazon’s ambitions. (The Times £)

Could England’s “freedom day” on Monday be the harbinger of leaner times for Deliveroo? Some investors are concerned the takeaway boom will fizzle out, with rival Just Eat Takeaway’s shares falling sharply this week despite bumper orders in the first six months of 2021. (The Guardian)

Unilever was once the stock you should never sell – but the world has changed. The classic ‘quality compounder’ faces new threats from brands that use the internet to come from nowhere. (The Telegraph)

With a 150-year heritage in sugar and syrup, Tate & Lyle and its shares may not seem the obvious candidate to benefit from growing fears about expanding waistlines. But the group sold off those legacy businesses in 2010, leaving two main divisions, one focused on turning corn into sweeteners and starches, the other on creating healthy ingredients for the food and drinks industry. (The Daily Mail)

‘Fire and rehire’ battle to intensify amid push to make the employment practice illegal. Nearly one in 10 workers have been asked to reapply for their jobs since the start of lockdown, research suggests. (Sky News)

Hawksmoor, the upmarket steakhouse chain, could join the queue of companies that are planning to float on the London Stock Exchange. (The Times £)

After her Co-op crisis mission, now Pippa Wicks is focused on the redemption of John Lewis. In a turbulent year, the new boss of the retailer has had to make deep cuts. Can she revive its fortunes? (The Times £)