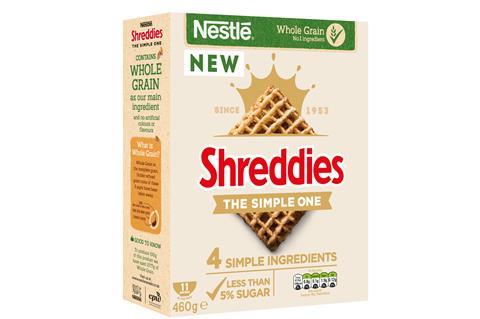 Nestlé has added a new version of Shreddies cereal made with just four ingredients.

Called ‘The Simple One’, it is made with wholegrain wheat, fruit purée, date syrup and “a pinch” of salt, and is non-HFSS – meaning it will not be affected by the government’s coming crackdown on unhealthy food promotions and advertising.

Nestlé Cereals marketing director Toby Baker said it marked “our new innovative approach to NPD, in which we are not just reducing negative nutrients, but starting with less – just four ingredients in this case”.

The cereal’s nutritional credentials are all green under the traffic light system, and it is touted as being high in fibre.

“Being a non-HFSS and all green traffic light product, it also supports our wider commitment to ensuring the majority of our cereals are non-HFSS by the end of 2021,” added Baker.

The cereal has rolled into Waitrose, Ocado, Tesco and Sainsbury’s.

Shreddies isn’t the only brand focusing its efforts on the upcoming crackdown on HFSS products: snacking brand Eat Real, for instance, has given itself an overhaul in a bid to become ‘fully non-HFSS’. 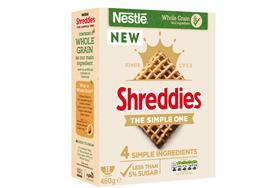