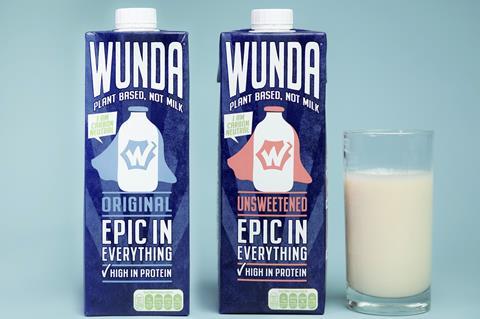 Nestlé will launch its new plant-based dairy alternative Wunda in UK and Irish supermarkets next week.

Launched across Nestlé’s French, Dutch and Portuguese markets in May, Wunda is pitched as “the closest thing to milk” by Nestlé and will go on sale in Tesco and Co-op initially, from 28 June.

Made from yellow split peas, the drink will be available in two ambient variants: original and unsweetened (rsp: £1.90/950ml), and had “strong nutritional values” compared to similar plant-based drinks on the market, the food giant said. Wunda was also low in Sugar and fat, a good source of protein, fibre, vitamins D, B2 and B12, and was enriched with calcium, it added.

Developed as part of Nestlé’s R&D Accelerator initiative – which works with “a startup mindset” – in just six months, Wunda was also certified as carbon neutral by the UK Carbon Trust, Nestlé said.

This was achieved through several measures along the supply chain, including using renewable energy in production and reducing emissions during distribution, in addition to “high-quality” offsetting. Its main split pea ingredient is sourced from farms in France and Belgium.

Nestlé added that the drink offered a “neutral, refreshing taste” that made it a good alternative for shoppers who wanted a plant-based drink that tasted closer to dairy, and could be drunk on its own, poured on cereal, used in hot beverages, frothed, cooked and much more.

“We are really excited to be bringing Wunda to the UK and Ireland,” said Nestlé UK & Ireland MD for food and dairy Honza Dusanek.

“With plant-based diets growing in popularity, more people are turning to alternatives to milk for their daily cereal, latte, desserts, baking or cooking, but it’s very difficult to find one great plant-based milk alternative for every use.”

Nestlé‘s aim with Wunda was “to make plant-based milk alternatives an easier and more attractive choice for people who want milk that tastes closer to dairy but remains just as versatile”, he added.

“We want to offer a drink that tastes great and makes using a plant-based milk alternative a Wunda-full, tasty, positive, no-compromise experience that is good for you and good for the planet.”

Wunda would look to “disrupt the market, stand out and offer something different to what’s already on the shelves”, he said.

Other major suppliers to have entered the market recently include Arla with its oat-based Jörd drink last August, and Linda McCartney’s, which unveiled a four-strong lineup of oat, soya coconut and rice milk in May. 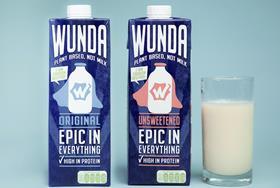