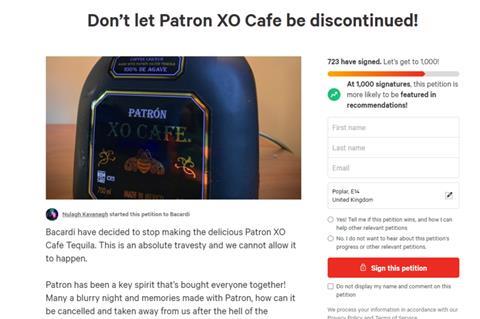 Fans of Bacardí-owned coffee liqueur Patrón XO Cafe have started a petition urging the spirits giant not to discontinue the drink.

It comes after The Grocer revealed last week that Bacardí planned to cease production of the drink, which is popular in the UK among bar and pub-goers.

The Change.org petition, started by Nulagh Kavanagh, called the decision to discontinue Patrón XO Cafe “an absolute travesty and we cannot allow it to happen”.

It had “been a key spirit that’s bought [sic] everyone together! Many a blurry night and memories made with Patron, how can it be cancelled and taken away from us after the hell of the pandemic. Enough is enough!”, it said. “We need to stop this mistake in its tracks and let Bacardi know it’s not acceptable! Please join the petition, our nights out and patron espresso martinis depend on it!”

Similar strong emotions could be found in the comments section with one protesting that: “the world is s**t enough without [Patrón XO Cafe]”.

At the time of writing, just over 700 people had signed the petition.

Patrón Tequila president and COO Mauricio Vergara said the spirits maker was discontinuing the drink because the business wanted to focus “on growing and protecting production and supply of our core super and ultra-premium tequilas”.

Production of those core SKUs: Patrón Silver, Patrón Reposado, Patrón Añejo and “other Patrón super and ultra premium variants” was ”our top priority”, he said.

The drink, while popular in the on-trade, never really made a splash in retail: its sales were up £550k to £1.9m over the year to 15 May 2021 [NielsenIQ]. At the time of writing, Patrón XO Cafe was still available from retailers online in the UK. 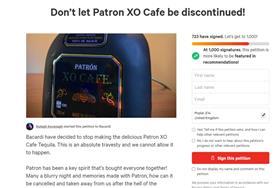