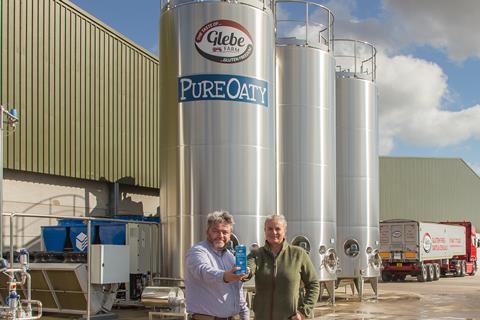 British plant-based drinks brand PureOaty has a lower carbon footprint than any other oat drink on the UK market, its owner Glebe Farm Foods has claimed.

A carbon accounting study conducted in May by NFU Energy found the drink had an average footprint of 0.29kg of CO2 equivalent per litre – lower than other major alt milk brands, it said. For example the figure was some 0.03kg per litre lower than the claims made by Oatly’s lowest-emitting organic variant, according to data for Oatly by CarbonCloud.

In comparison to the average GHG emissions of UK-produced dairy milk – 1,600kg per tonne of end product – PureOaty weighed in 82% lower at 288.71kg per tonne.

Incorporating CO2, methane and nitrous oxide emissions throughout PureOaty’s supply chain from cultivation through to distribution, the study found most of Glebe’s emissions stemmed from UHT processing and packing emissions (52%), with another 21% coming from upstream packaging emissions.

According to the report, these emissions could be lowered by increasing the proportion of energy the company already generates from renewable sources – namely solar power and biomass – altering motor-driven equipment and adding more recycled material to its packs.

Is carbon offsetting really helping fmcg brands save the planet?

Meanwhile, oat farming accounted for just 4% of its footprint, while transport formed 8% of its total. Glebe’s joint-MD Philip Rayner said the business keeps food miles “to an absolute minimum” as it sources all of its oats from within a small radius of its Cambridgeshire HQ.

“As food growers and manufacturers, we recognise our responsibility to minimise the environmental impact of our operations and this report highlights the unique benefits our British farm can offer to the growing UK plant-based drinks market,” Rayner continued.

“We care deeply about the environmental burden of food production because we’ve experienced first-hand the changing weather patterns over the years. By growing, milling and ‘milking’ our own oats right here in the UK, Glebe Farm can offer an oat drink with lower CO2 emissions than any of its competitors.”

Speaking to The Grocer in March, Rayner estimated approximately 20% of the environmental cost of imported oat drinks was on the road haulage to bring them in.

Can carbon labelling for food and drink products finally find its feet?

The announcement comes amid simmering tensions in the oat drinks market, particularly between Glebe Farm Foods and Oatly.

The family-owned SME is currently in the midst of a legal battle with the plant-based giant over whether PureOaty has infringed the Oatly trademark.

Should Oatly’s claim fail in the courts, Glebe said it would assess whether to put its new emissions figure on packs – a move that would put it in direct competition with Oatly’s drinks, albeit from a smaller base of listings. While Oatly has listings across the mults, PureOaty is only listed on Amazon and in Holland & Barrett.

However, if Oatly is successful, it would jeopardise the significant investment Glebe has poured into PureOaty since its launch in 2020. In October last year, the company opened a multimillion-pound extension at its main site that gave it the capacity to produce 50,000 litres of oat drink per day.

Further intrigue has been added by Oatly’s decision to build its first UK factory in Peterborough, which is just a short distance from Glebe Farm. 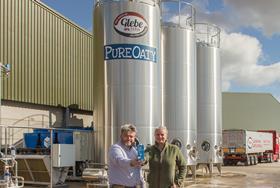