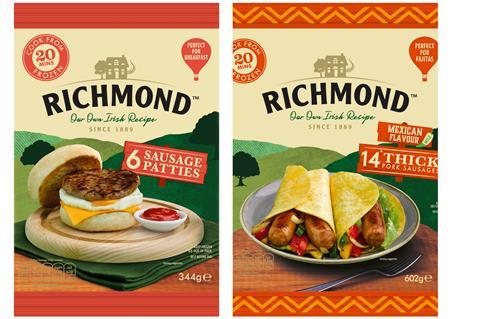 Including the brand’s first move beyond the sausage format in its meat range with the launch of its Sausage Patties – a move that mirrors its recent expansion into new formats in the plant-based market – the NPD also consists of four new ready meal variants and two new flavoured sausage SKUs. All seven products rolled into Iceland yesterday (13 April).

The Kerry-owned brand said its Sausage Patties (rsp: £2/344g) were aimed at family breakfasts, while the expansion of its ready meals – a range it launched last year, and which now includes Sausage Hotpot, Toad in the Hole, Sausage & Mash and Creamy Sausage Pasta – would provide quick and easy single-serve dinnertime solutions (rsp: £1.40/350g).

Meanwhile, the new sausage variants – in BBQ and Mexican flavours – would bring “an exciting new twist to traditional sausage dishes” to family mealtimes, Richmond said. They had been chosen as they were cited as “family favourite flavours” in the brand’s consumer research (rsp: £2.25/602g).

All seven launches have been showcased in a branded cabinet at Iceland.

“Over the past 12 months we have seen rapid growth across the frozen category, which has been supported by our own sales,” said Victoria Southern, marketing and category director at Kerry Foods.

“We pride ourselves on our commitment to flavour and bringing new products to market that make dinnertimes at home more exciting and inviting than ever. We are so excited to be diversifying the frozen sector, giving shoppers even more choice at mealtimes and at accessible price points.”

Richmond’s NPD launch has come as the frozen category has experienced a sustained boom since the beginning of the Covid-19 pandemic. 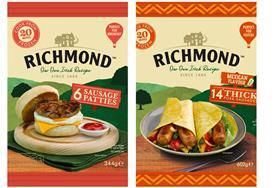