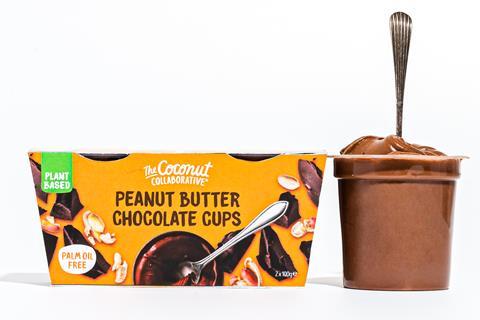 Plant-based brand The Coconut Collaborative has unveiled a new peanut butter and chocolate dessert line in what it has claimed is a ‘category first’.

The Peanut Butter Chocolate Cups NPD was said by the brand to be the first potted dessert offering in retail to combine the two flavours – a popular combination in both confectionery and baking.

Containing a coconut base, smooth peanut butter and dark chocolate, the Cups are vegan as well as lactose and gluten-free. The Coconut Collaborative added that, like the rest of its range, the new line does not contain palm oil, with rapeseed oil used instead.

“The team and I have been chatting about peanut butter for quite a while – we know this is a much-loved combination and have seen many of our customers combining our Chocolate Pots with their peanut butter spreads,” said The Coconut Collaborative’s founder and MD, James Averdieck.

“The big thing for us with this one was getting the ingredients list right and making sure our peanut butter didn’t contain palm oil.”

The launch follows The Coconut Collaborative’s first TV ad campaign in January, in which it sought to tackle some of the negative perceptions surrounding plant-based, such as its taste credentials

It also comes amid an emerging three-way battle in the free-from potted desserts category between The Coconut Collaborative, Gü and Nush. Nush only entered the segment in January with the launch of its first line of plant-based pots. 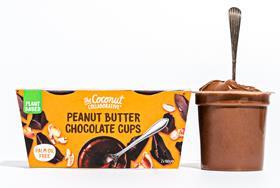