Pilgrim’s drives Tulip back to black in pork turnaround 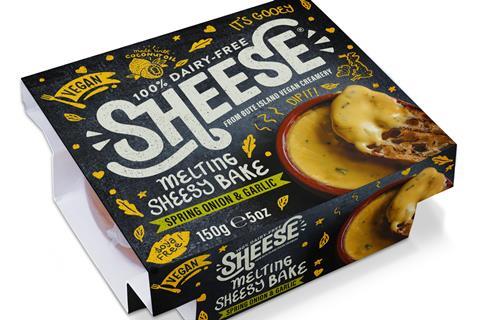 Debuting in Sainsbury’s on 10 October, the Melting Sheesy Bake Spring Onion & Garlic variant is described by the brand as the ‘ultimate plant-based comfort food’ which has a ‘punchy smoky aroma’.

Available in a 150g format (rsp: £3.75) and sold in an oven-proof dish, the coconut oil-based product can be popped in the oven and served with crusty bread, used as a sharing dip with crudites and crackers, or as a base for pasta sauce, the brand said.

“Consumers who are making the switch to plant-based – whether vegan or flexitarian – tell us they want greater choice, not only in terms of taste and texture but also for different eating occasions,” White said. “Currently, there is little premium element to UK dairy-free cheese-eating occasions.”

The company, which is based on the Isle of Bute off the west coast of Scotland and employs 180 people, first launched Sheese in 1988 as a soya-based product but it is now made using coconut oil.

The brand saw sales rise by 16.6% to £1.2m last year with volumes climbing 12%, according to data for The Grocer’s Top Products survey [Nielsen 52 w/e 5 September].

The launch follows moves into the hot cheese segment by a number of brands over the past 18 months. Lactalis launched a Seriously Cheese Nuggets SKU last June, which followed the launch of Seriously Melting Pots in 2018. The French dairy giant also unveiled a Président Brie Bakes line last July.

Elsewhere, Saputo Dairy UK teamed up with Iceland earlier this month to launch a cheese-orientated frozen sides and snacks range under the Cathedral City brand  for Christmas, including products such as Mac and Cheese and Cheesey Flatbreads. Bel UK also took its Boursin brand into the hot segment with the launch of a pair of Hot Cheese Bites in September. 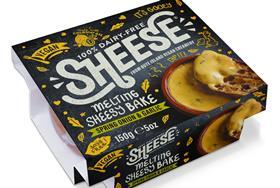