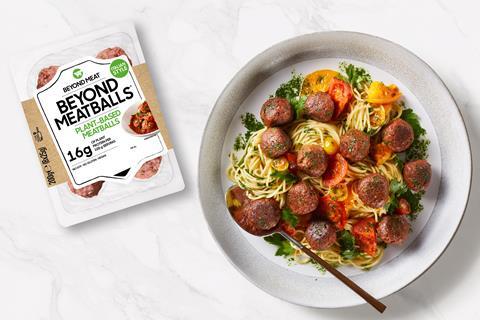 Beyond Meat has further expanded its presence in the mults with the UK debut of its Beyond Meatballs product in Sainsbury’s.

Beyond Meat said the chilled product was pre-seasoned with “a signature blend of Italian spices such as rosemary, sage and oregano”. The Beyond Meatballs’ “versatile taste”, ensured it was “an ideal choice for a variety of meals including pastas, sandwiches, pizzas, soups and more”, it added.

The US plant-based giant already sells its Beyond Burger, Beyond Sausage and Beyond Mince across UK supermarkets.

It said the plant-based meatballs contained 16g of protein per 100g serving and was made from “simple, plant-based ingredients without soy, gluten or cholesterol”.

The launch of the Beyond Meatballs follows the registration of a UK trademark under the name by Beyond Meat in February, alongside other potential new products such as a Beyond Hot Dog, a Beyond Steak, Beyond Breakfast and a Beyond Pulled Chicken.

Beyond Meat also entered a “win-win” joint venture called The Planet Partnership with PepsiCo in January, with the aim of diversifying its product offerings into snacks and drinks.

The brand has also significantly increased its presence in UK supermarkets this year, with new listings in Waitrose and an expansion of its supply deal with Sainsbury’s during the spring, after it started production of its products in Europe last summer.

The business has also greatly increased its availability in supermarkets on the Continent this year, with listings in more than 1,000 German stores and over 1,100 Austrian ones.

“These new and expanded retail partnerships in the UK serve as strong proof points that Europe’s appetite for plant-based meat and Beyond Meat products in particular is on the rise,” said Beyond Meat chief growth officer Chuck Muth in April. 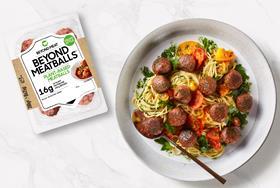