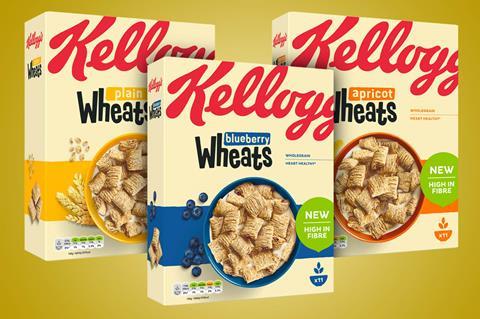 Kellogg’s has unveiled a trio of non-HFSS, high-fibre cereals.

The cereal giant has created a trio of new flavours – Apricot, Blueberry and Plain – under its Wheats brand.

They are all non-HFSS and are claimed to be high in fibre, containing 74% or more wholewheat. There are also low in fat and salt.

They had been ”carefully developed” at the brand’s Manchester factory to offer “just the right balance of flavour, with a crunchy wholewheat shell encasing a smooth, fruit flavoured filling” in the case of the Apricot and Blueberry variants, said Kellogg’s.

Shoppers were looking “to companies like Kellogg’s to help them make healthier choices in the morning”, said Kellogg’s senior brand manager Emily Dutton.

They cereals have rolled into Tesco and Morrisons (rsp: £1.90).

The NPD is part of a wider push by Kellogg’s to improve the health credentials of its cereals. It has this year already pledged to remove 10% of the sugar and 20% from its children’s range by the end of 2022.

Kellogg’s isn’t the only big name in cereal switching up its range ahead of the HFSS ban. Nestlé, for instance, launched a new ‘simple’ non-HFSS version of Shreddies containing just four ingredients.

In early October, Nestlé unveiled plans – like Kellogg’s – to slash the salt and sugar content of its cereals, with plans to use up to 16% less sugar and 50% less salt across Coco Shreddies, Frosted Shreddies, Honey Cheerios, Nesquik, Cookie Crisp and Golden Nuggets by the end of 2021.

Read more: how has Kellogg’s escaped HFSS ban – and how can others in the cereal category? 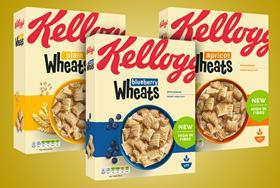