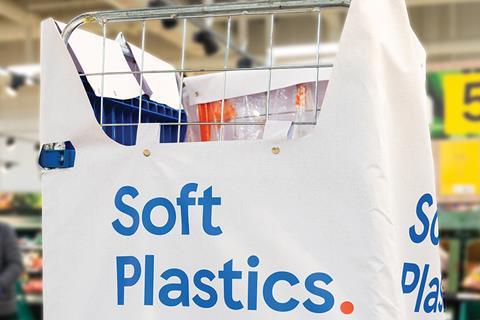 Tesco is enabling customers to bring back soft plastics for recycling at all its large stores from today.

The retailer said the rollout across its large store estate had been brought forward due to the huge consumer support for the scheme it received during a 171-store trail in Wales and the south west of England.

Tesco said the move would see it collect more than 1,000 tonnes of soft plastics for recycling each year. It will look to use much of this material in  the packaging of Tesco products.

At the trial stores, 85% of customers said it helped them recycle more than they would have done otherwise. Customers also reported they liked the convenience of being able to combine recycling with their shopping.

The scheme will allow shoppers to recycle items such as the clear film used to wrap meat and fish, crisp packets, fruit & veg bags and sweet wrappers.

The most common items to be returned during the trial were bread bags, fruit and vegetable packaging, crisp packets and salad bags.

“We’re tackling the impact of plastics by removing and reducing it as much as possible, helping customers move to reusable alternatives, and ensuring they can recycle everything that’s left,” said Tesco director of quality Sarah Bradbury.

“I’m delighted we’re rolling out collection points to the whole of the country so even more customers can help us stop plastic from going to waste.”

Wrap CEO Marcus Gover said: “Tackling plastic bags and wrapping is the UK Plastics Pact’s number one priority, and increasing front-of-store collection points is a great step forward. As little as 6% of this problematic plastic is collected and recycled in the UK, despite making up nearly a quarter of all plastic packaging by weight.

”By offering shoppers a simple and consistent collection system, Tesco is helping to ensure much more of this problem plastic is captured and goes on to be recycled. I welcome this move which will help considerably towards the UK Plastics Pact’s target of increasing plastic recycling.”

In a recent sample, Tesco was able to recover over 80% of the soft plastic returned by customers. It is now working with recyclers to explore what can be done with the remaining 20%, which is currently sent for energy recovery.

A number of retailers are working to make it easier for consumers to recycle soft plastic. The Co-op recently introduced such a scheme to all stores and has also kicked off an out-of-home advertising push to highlight it. The society placed ads outside stores owned by rivals including Tesco, M&S and Sainsbury’s. 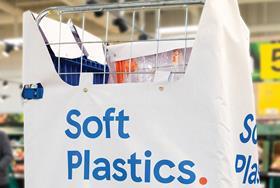