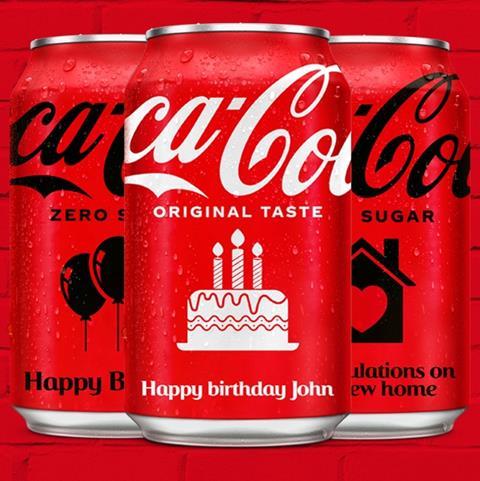 Coca-Cola has launched personalised cans on its DTC site, allowing consumers to design special occasion products with their choice of name and message printed on them.

The customisable cans are available on the brand’s Your Coca-Cola site, a joint venture between Coca-Cola Europacific Partners and The Coca-Cola Company, launched in November.

A spokeswoman for CCEP told The Grocer it was the “first time we’ve allowed for true personalisation”. The “functionality” had been enabled “with the support of trusted partners” the company said. The brand’s Your Coca Cola site – its first-ever online store for customers in the UK – is operated in partnership with THG.

She said it was “exciting to see how consumers are engaging”.

“With this in mind, we’re already looking to extend the offering in the future,” she said. “Through Your Coca-Cola we’re aiming to drive long-term brand loyalty and generate insight that will help us optimise our range across all of our retail channels, and the ability to personalise cans gives us another point of differentiation.”

Shoppers select either a 330ml Coca-Cola Original Taste or Coca-Cola Zero Sugar can, and then choose one of 20 graphics – including a mortarboard cap, wedding rings and birthday balloons. They then enter a personalised message and name, totalling 56 characters.

The personalised cans cost £5 with free delivery in around five days.

In April, Coca-Cola bolstered the DTC operation with the addition of spirits brands Bacardí, Bombay Sapphire, Martini and Jack Daniel’s to make up ‘mixers bundles’ with Coca-Cola and Schweppes varieties. The spirits collaboration came a month after the site began listing Pringles products, which can also be bought as part of bundles. 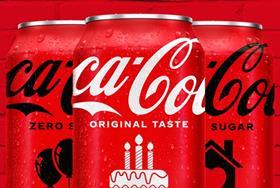