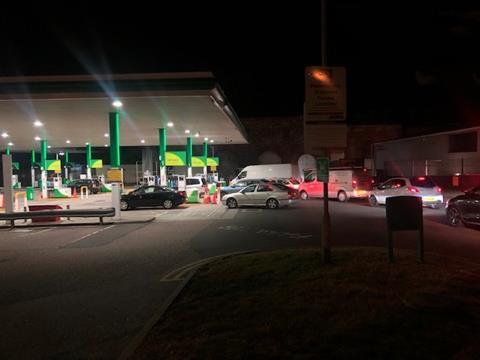 Boris Johnson was under increasing pressure to give key workers priority at petrol forecourts last night after levels of panic buying escalated (The Times £).

The Guardian gives a voice to three key workers on being hit by the UK fuel crisis. A carer, a GP and a social worker speak about the impact the crisis is having on them and their work.

People buying fuel when they do not need it are the cause of queues at petrol stations and empty pumps, the environment secretary has said (BBC News).

Fuel prices have reached their highest level in eight years after more panic buying left some retailers reporting 90% of their stations had run dry (The Times £).

The centre-left politician in pole position to replace Angela Merkel as German chancellor has pinpointed the decision to end freedom of movement with Europe after Brexit as the reason for Britain’s petrol crisis (The Guardian).

Plans to offer temporary visas to foreign lorry drivers will not make a big difference to the UK’s skills shortage, the boss of one of Europe’s biggest goods vehicle firms has said (BBC News).

Discount grocer Aldi will continue to expand UK store numbers rather than its digital offering even as the Covid-19 pandemic has driven more consumers to shop online (The Financial Times £).

Aldi will create 2,000 jobs and open another 100 stores across the UK over the next two years as part of a £1.3bn plan to take a larger share of the British grocery market (The Guardian).

The £1.3bn investment also will expand the discounter’s network of distribution centres, including a new 1.3 million sq ft warehouse in Leicestershire, as well as launching a trial store in Greenwich, south London, with no checkout (The Times £).

Grant Thornton, which served as Patisserie Holdings’ auditor from 2007 until the company’s collapse in early 2019, accepted there were failures in the audit work, including statements around revenue, cash and the company’s fixed assets (The Guardian).

The accounting regulator said that Grant Thornton would pay £2.34m and David Newstead, its director of audit, £87,750 for “serious lack of competence in conducting the audit work” of Patisserie Holdings (The Times £).

The penalties were reduced from £4m for Grant Thornton and £150,000 for Mr Newstead due to mitigating factors, including the firm’s admission of the failings (The Telegraph).

If the auditors had done their job properly, they “should have identified clear indicators of the risk of material misstatement [of Patisserie Valerie’s accounts] due to fraud”, the Financial Reporting Council said (The Financial Times £).

A Czech billionaire has spent almost £9m preparing his bid to run the National Lottery, outgunning his rivals before the auction of Europe’s most prized gambling contract (The Telegraph).

A feature in The Financial Times (£) examines the rise of the rapid delivery apps and asks “is this convenience gone too far?”.

The Guardian turns the spotlight on Europe’s meat industry, with unions calling for a Europe-wide ban on the use of subcontracted workers, kept on lower pay and conditions. 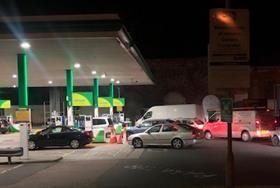