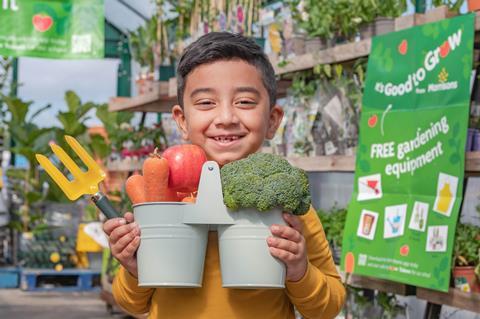 Morrisons is donating gardening equipment to schoolchildren across the UK in a new campaign called ‘It’s Good To Grow’ that hopes to educate them on where their food comes from.

Customers will gain one ‘Grow Token’ in their My Morrisons account for every £10 that is spent in store or online. The tokens can be donated to any school of the shopper’s choice to redeem equipment such as gardening tools, composting bins and seeds.

The move comes as new research by YouGov, commissioned by Morrisons, found some children aged six to 15 don’t have a good understanding of how fruit & vegetables are grown.

Only 34% correctly identified how asparagus was grown, with 32% saying it was grown underground and 21% saying they didn’t know.

The research also found more than half of children aged six to 10 were not currently eating their recommended daily amount of fruit & vegetables.

The Morrisons scheme aims to build a closer relationship between children and fruit & vegetables so they can see that it can be easy and inexpensive to grow their own produce once they have the necessary skills. The scheme will last until 24 October.

“We’re really proud of the work that we do for British food and with British farmers,” said Morrisons chief customer and marketing officer Rachel Eyre.

“It’s great to be able to launch a campaign that will give our youngest customers the knowledge and equipment to gain a better understanding about where food comes from and how to grow it.

“We want children to engage with nature as it will help them to start eating more healthily now and in the future, because they are more likely to eat fruit & vegetables when they understand them or have grown them themselves.” 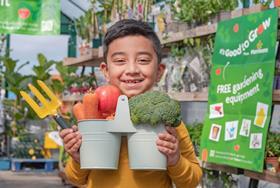