M&S to close shops in Bristol, Maidstone and Poole as part of store renewal programme 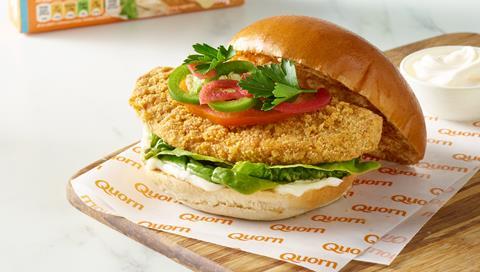 Quorn is bolstering its vegan selection with a frozen ‘fakeaway’ range based on chicken shop classics.

Made from Quorn’s mycoprotein, the range was designed to address the needs of shoppers “crying out” for vegan takeaway options, the brand said.

“We’re confident this new range will be a penetration driver within frozen meat-free, especially as we come into winter months, where shoppers are looking for more comforting eats at home.”

The burger will make its debut in Asda on 18 October, before rolling out in Tesco on 1 November, where it will be joined by the buffalo wings and crunchy strips, both of which will be sold in sharing boxes of eight.

In addition, Quorn is launching two new vegan chicken-style products for foodservice under its ChiQin concept.

Buffalo Wings and Southern Fried Wings will join the Buttermilk Style Chicken Burger that launched into restaurants in April this year.

“Chicken is a staple on every menu and diners are increasingly expecting to see meat-free options on the menu, whether they follow a meat-free diet or not,” Riley added.

“Meat-free dishes are no longer on the menu only to cater for the minority, whether diners are vegan, vegetarian or flexitarian, 25% believe it is important that the meals they eat out of home do not contain much meat.”

The launch comes on the back of a 55.9% increase in value sales in the meat-free sausage segment over the past year [Kantar 52 w/e 11 July], taking total sales in the mults to £49m.

The NPD is the latest in a flurry of activity for Quorn, which opened a pop-up takeaway restaurant in London for three days in September, serving meat alternatives to the nation’s favourite chicken shop classics.

Last month, the brand expanded its sausage line-up with the launch of vegan ‘Brilliant Bangers’.

However, Quorn, which was acquired by Japanese noodle giant Monde Nissin in 2015, said the Covid outbreak had a “significant impact” both on-demand in its UK and core markets and on its manufacturing capacity and efficiencies. 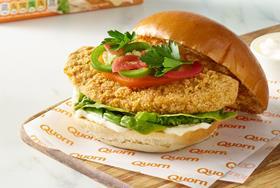