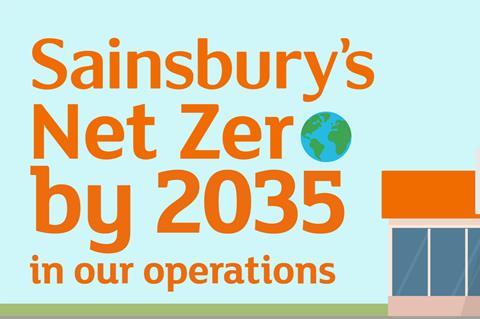 Sainsbury’s has announced it is accelerating its target to become net zero across its own operations by 2035 – five years earlier than its original schedule.

This means the retailer will be using 100% renewable electricity across its entire estate by the end of the year.

It has also committed to the long-term purchasing of renewable energy from new wind farms and solar projects to be built over the next two years.

“The progress we’ve made has enabled us to accelerate our own targets and move faster to cut our emissions.

“We recognise that we not only have a responsibility to our colleagues and the communities we serve in the UK, but to those we source from globally, to reduce the impact our business has on the environment.”

Sainsbury’s’ new net zero goal by 2035 is in line with the UN’s own goal to limit global warming to 1.5 degrees.

The supermarket has invested over £320m in the past decade in more than 3,100 sustainable initiatives.

However, Sainsbury’s acknowledged it needed to ramp up efforts and collaborate with government, industry players and suppliers to meet its own ambitious targets.

Earlier this year, the grocer wrote to 400 of its top suppliers, asking them to report and disclose data related to their carbon reduction targets.

“We have a strong heritage in reducing our own emissions and are collaborating closely with our suppliers to ensure we’re driving positive change across our value chain too,” Roberts said. “I’m really proud that Sainsbury’s continues to lead the charge and encourage others to change and evolve with us for the benefit of all.”

Business and energy secretary Kwasi Kwarteng said the retailer’s decision to accelerate its net zero targets was “fantastic” and that he hoped it would encourage other businesses “to show the same level of ambition”.

Sainsbury’s has been named this year’s COP26 principal supermarket partner. As part of the role, the group will work in partnership with the UK government and other world leaders, climate experts and fellow businesses to tackle the current environmental crisis.

“With the COP26 climate summit starting in a few days, I am delighted that our principal partner, Sainsbury’s, will be going net zero by 2035,” said COP26 president-designate Alok Sharma.

“This is a great example of the climate leadership we need across all sectors as we work together to keep 1.5 degrees within reach.” 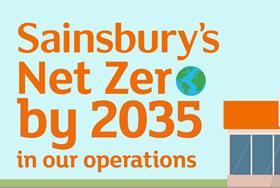