UK food and drink exports to the EU slump by £2bn

Sewell On The Go profits soar despite 18% sales decline 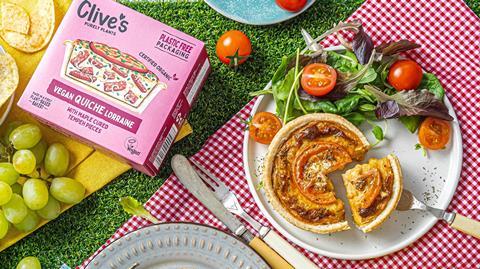 Plant-based investment firm Veg Capital has expanded its portfolio of vegan brands with the acquisition of organic pie maker Clive’s Purely Plants for an undisclosed fee.

The specialist private family fund will buy out existing majority shareholders Sally and Chris Carson, who have grown the Devon-based business steadily over the past 17 years.

Founded in 1986 by Clive Lowe, who began selling the bakery’s signature ‘creamy mushroom pie’ from his bicycle, Clive’s today supplies its range of plant-based pies, savoury tarts, quiches and nut roasts to supermarkets, such as Waitrose, Morrisons and Ocado, and independent health food shops. It also exports to the US, Australia and Dubai.

Earlier this year, the business claimed a UK first with a vegan quiche lorraine, while this week it moved into puff pastry pies for the first time, featuring seitan as a meat replacement.

In 2020, Clive’s relocated to a purpose-built factory in Dartmouth, four times the size of its previous home in Buckfastleigh.

With the investment from Veg Capital, the business is aiming to increase production by 400%, develop new products and reach turnover of £10m.

MD Esther Pearson remains a shareholder and will continue to run the business, with Veg Capital taking a majority stake.

Since launching in June 2020, the firm has backed more than 10 vegan brands, including Mighty Pea, This, Plantifull, Naked Snacks, Planty and One Planet Pizza.

Glover said the partnership with Clive’s had “huge potential”.

“Clive’s offers the best of both worlds: over 30 years of invaluable experience, with all the ambition, scope for growth and enthusiasm of a startup.

“This partnership has huge potential to further our mission of replacing animals in the food system, and we’re thrilled to be working together.”

Pearson added: “We’re over the moon to have the backing of Veg Capital. It marks a new era for Clive’s, one where we can continue to expand, innovate, and help shape the future of plant-based eating.

“We’ll always stay true to who we are, focusing on food that tastes good, and does good.” 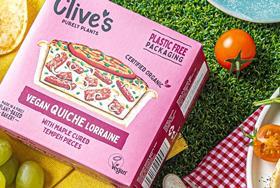